From letterpress to litho. And back. 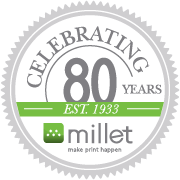 In April of 1933, in the midst of the Great Depression, William Lyle Millet became Millet "the" Printer with an investment of $2,000. He walked the streets of downtown Dallas making sales in the morning, then rushing back to produce the job in the afternoon. The ninth sale he made was to a lawyer who later formed a title company. That company is still serviced by Millet to this day. His son, W. P. Millet, joined the company in 1934 and worked 6 days a week until his death in 1997.

The business moved from the first tiny leased shop to a succession of three company-owned facilities, two of which were purchased by the City of Dallas to complete the campuses of the Dallas Convention Center and the Dallas City Hall. The present location, inaugurated in 1966, has seen four additions over the years to facilitate ever expanding growth.

The first shop featured hand set type used to print on a hand-fed press. Later linotype and zinc cuts were employed to print good quality work on automatic letterpresses. In the midst of World War II, offset printing moved to the forefront in the industry. War needs precluded the purchase of any new equipment, so used presses were bought while much of the camera and platemaking equipment was literally made in-house.

Offset lithography has opened the doors over the years to a rapid succession of improvements. Many hand processes have yielded to advanced technology which provides a speed and quality that were not previously possible. While letterpresses have given way to multi-color high speed offset presses, Millet still utilizes nine letterpresses which facilitate the growing retro trend to letterpress and also provide for high quality embossing, foil stamping and die cutting.

Now letterpress, offset, the new digital processes and complete finishing are the order of the day. Though change has been rampant, some things have never changed: personal service, satisfaction guaranteed, fair pricing and complete honesty.